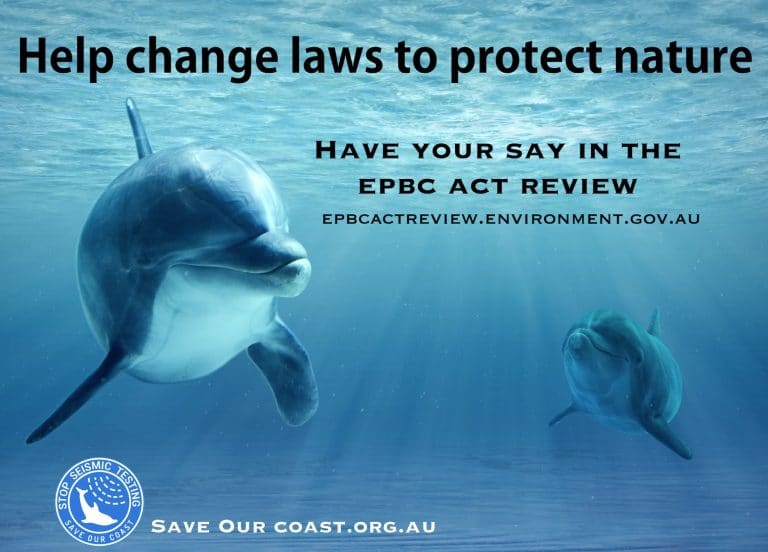 The federal Environment Protection Biodiversity Conservation (EPBC) Act is the legislation that governs environmental protection in Australia. Now more than ever it is clear we depend on nature for our very survival and wellbeing, yet Australia has one of the world’s worst records for loss of species and habitat: it is clear our environmental laws are failing. The EPBC Act underwent a once-in-a-decade independent review  to which Save Our Coast made a formal submission and helped facilitate public submissions and comments to the review (which closed on 31st October 2020), to help improve laws to protect nature.

See our submission to the EPBC Act Review
PUBLIC SUBMISSIONS AND COMMENTS HAVE NOW CLOSED.
Thank you all for participating and having your say to improve laws to save nature.

Why did we get involved in the EPBC act Review?

The EPBC Act is supposed to protect the environment, threatened species and habitat, yet Australia has the worst extinction rate in  the world. It is clear our environmental laws are failing. The EPBC Act astonishingly allows fossil fuel companies to self assess whether or not they think an activity will cause significant impact to threatened species or the environment.
Under the  EPBC Act, seismic blasting was allowed to occur in a whale migration path and dolphin habitat along our coast, despite the known devastating impact of seismic blasting. The EPBC Act allowed seismic surveys in Lake Macquarie despite endangered turtles being present. It allows fossil fuel companies to blast and drill for fossil fuels off our beautiful coast without consideration of the cumulative effects of seismic blasting, climate damage, or risk to local ecosystems.
See what our friends from the EDO, ACF and WWF had to say about the EPBC Act Review:
EDO (Environmental Defenders Office) EPBC Act Review 2020
ACF (Australian Conservation Foundation) Guide to making a submission
WWF (World Wildlife Fund) Submission to response to EPBC Act review
The review was our chance to demand laws to save our precious marine animals, and the environment we all love and rely on to survive. Submissions and comments are now closed. Thanks to all of you who added your voice to help improve laws to help save our natural world.
See our submission to the EPBC Act here.
Save Our Coast continues to advocate for environmental justice, including through legislative change, to help save nature, secure the safety of our precious fauna,  and save our coast we all love.