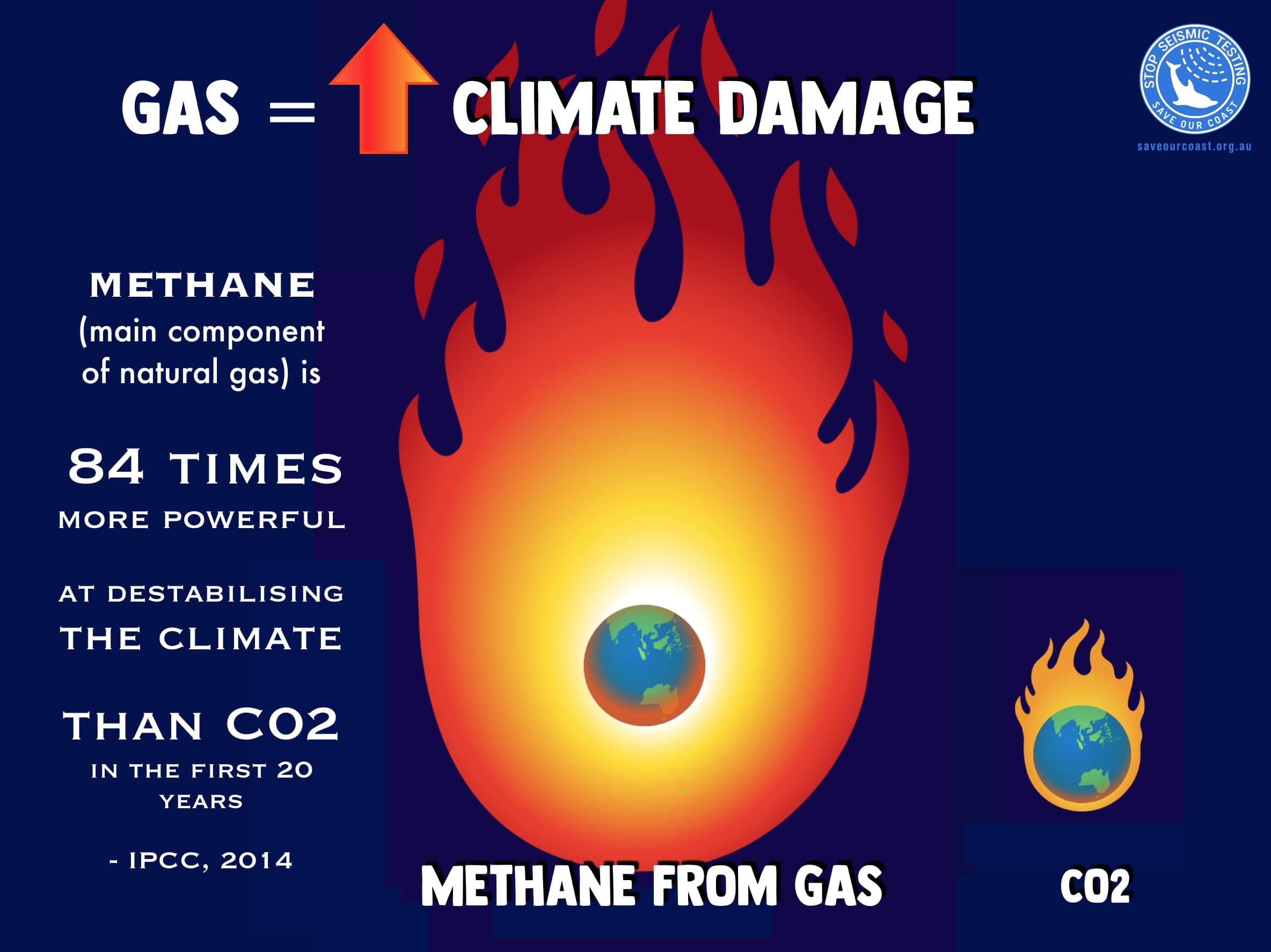 Gas is being promoted by the industry and the Australian government as part of the solution to climate change, a low-emissions alternative to coal that will reduce electricity prices and help us transition to renewables.

None of this is true.

Gas is mainly methane, a dangerous fossil fuel. When burned, it is claimed to have half the emissions of coal. However, in the process of extracting, transporting and processing gas, methane leaks, known as ‘fugitive emissions’. Methane, before it is burned, traps 84 times more heat than CO2 in the atmosphere in the first 20 years. It’s been estimated that if 3% of methane leaks, gas is actually worse than CO2 – yet no-one knows for sure how much methane does leak.

What’s more, the “half the emissions of coal” refers to combined cycle gas plants, but simple cycle “peaking” gas plants, which the gas industry promotes as “backup for intermittent renewables” because they can be turned on and off faster, are only about 25-30% better than coal, even before considering methane leaks.

We don’t even need gas.

Wind and solar energy are already cheaper than gas – and getting cheaper. Studies show that, when combined with battery and pumped hydro storage and demand management, they can provide all the electricity Australia needs – right now. In fact, Australia, with its abundant sunshine, can become a renewable energy powerhouse, exporting clean power to our Asian neighbours.

What’s more, gas production in Australia has more than doubled in the past decade, yet electricity prices have continued to rise. In fact, three-quarters of Australia’s gas is exported, and the high price of export gas has driven up domestic prices. Because we already produce far more gas than we need, any new gas production, such as PEP11, would be for export, generating profits for shareholders but not reducing the cost of electricity in Australia.

We must reduce greenhouse gas emissions to net zero as soon as possible. Gas is not a transition fuel: instead it delays the transition to renewables and locks us in to climate disaster.

Yet the Morrison government and Energy and Emissions Reduction Minister Angus Taylor are pushing hard for what Taylor has called a “gas-fired recovery” post-COVID-19. Taylor is introducing measures designed to stall investment in renewables, while the government has appointed an economic recovery commission full of fossil fuel executives. Read more here.